By using Roles, you can assign a list of agents to a specific role. Then, when running a report, creating a Realtime wallboard, etc., you can select the role rather than having to select each individual agent.

To create a Xima CCaaS Agent Role, while on the CCaaS Reports page, click the "..." menu button in the top right corner and select "Manage Roles." 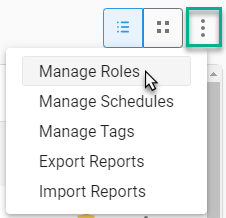 A window will then appear on the right featuring a list of your existing skill groups and roles on the right.

Note: By default, all skill groups will be listed as Agent Roles. You can use the pre-existing skills as roles on any agent report, or on any Realtime wallboard that you have built to display agent information.

Once the window of existing roles appears, to create a new role, type in the name of the new role in the "New Role" box at the bottom of the page. We'll call this new role "Jane's Team" Then, select the "+" symbol.

You will now see the new role in the list of existing roles.

In the list, navigate to the newly created role, then select the pencil tool to the far right.

A list of every licensed agent will now appear. Select from the list the agents that you would like to have belong to the new role. You can do this by either scrolling through the list and selecting the desired agents, or by typing in the agent name/extension in the "Search for Agents" section at the top of the page.

Once you've selected the desired agents, you can now simply close the window. The selected agents will now pertain to the role that you created, and the role can be used to feature the agents that you have assigned to the role in all areas of Xima CCaaS.

Repeat the process for any additional roles that you need to create.